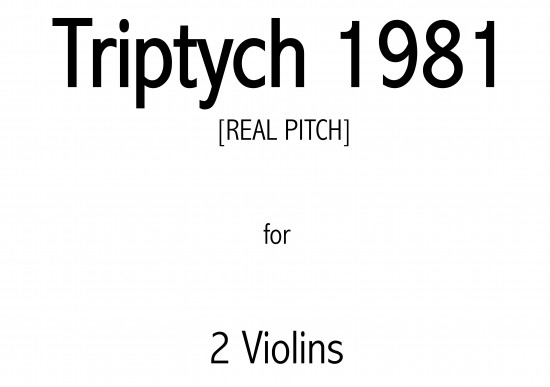 Triptych 1981 is an attempt to refract the altering and most often virtuoso traditions of the instrument through a historically colouristic prism. And via the use of the outer extremes of e.g. dynamics and density, the two violins hopefully reach and reveal new timbres that will travel beyond the commonly accepted sounding surface.

The idea of the triptych derives from a strategy of writing upon writing, or should one say painting upon painting, using a colouristic sound palette. By starting composing the centre panel (movement II), filling it with two or three fragments of ideas, which then spills over into the left-hand and right-hand panels (movement I & III) that are – according to the tradition of the triptych – similar considering a majority of traits.

In refusing to accept the idea that a single piece (the centre panel) – building up layer after layer – could exhaust all thinkable possibilities of its inherent musical material, the piece most naturally developed into one centre panel with two accompanying sides or flanks. The centre panel were written from A to B, then expanding and spilling over into the right-hand panel, which consequently unfolded the left-hand panel, i.e. where the music starts.

Finally, by indicating that all the material in all three sections derives from a couple of initial ideas, I simultaneously must underline that the different panels clearly stands solid by themselves, and therefore could be performed separately.

Francis Bacon painted images communicating his feelings and emotions but which transcended his own personal experience and conveyed the tensions and violent emotions of the twentieth century, and possibly beyond their creative timeframe to become universally pertinent and timeless for all mankind.

In reading Aeschylus’s Oresteia, the poetry most probably touched a chord within him such that he was to use motifs from the trilogy in a number of his works but also it pointed the way for him to engender strong emotions through his paintings without employing narrative.

Additionally the fate driven outcomes of the plays relate to Bacon’s painting practice of utilising accident in developing his paintings.The initial appeal of Aeschylus was most likely rooted in this bloody story of parental violence, revenge and exile from the home and the ongoing pursuit by the Eumenides.

Orestes, in Greek mythology, the only son of Clytemnestra and Agamemnon and brother of Electra and Iphigenia. After the slaying of Agamemnon by Clytemnestra and Aegisthus, Orestes, still a boy, was sent to live in exile. Since it was the duty of the senior male in the house to punish the murderers, Orestes was commanded by Apollo to avenge the crime. With the assistance of Electra and his friend Pylades, who accompanied him in all his adventures, he killed his mother and her lover.

After this matricide he was haunted by the Furies (Erinyes) until he reached Athens. He was tried and acquitted by the Areopagus, the tribunal of Athenian judges. Not all the Furies, however, accepted the verdict; and, to win full expiation from his crime, he was told to steal the sacred image of Artemis from Tauris. At Tauris he was reunited with Iphigenia and with her assistance stole the image and safely returned to Greece.

It is said that he later married Hermione, the daughter of Menelaus and Helen. In the Oresteia, Aeschylus dramatized his vengeance and expiation. The story was also used by Sophocles and Euripides.

Francis Bacon (The official home page of the estate of)