One of two elegiac trios 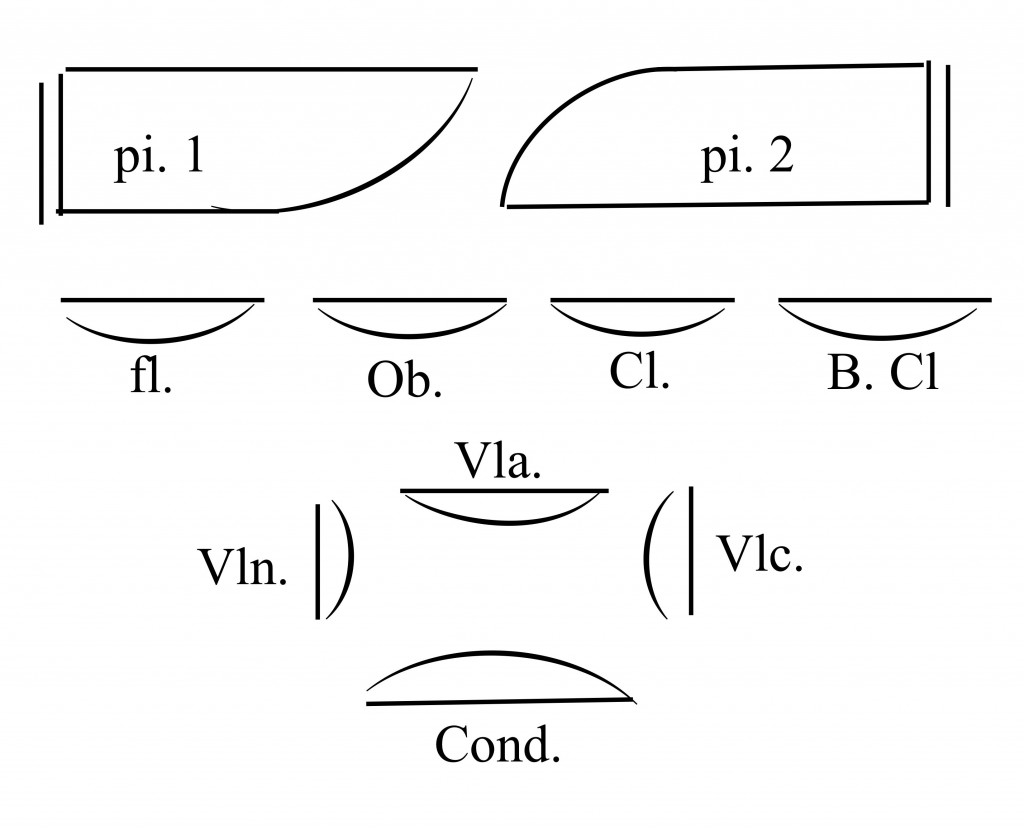 The ”Trio élégiaque No. 1 in G minor is a composition for piano, violin and cello by Sergei Rachmaninov. The trio was written on January 18-21, 1892 in Moscow, when the composer was 19 years old. The work was first performed on January 30 of the same year with the composer at the piano, David Kreyn at the violin and Anatoliy Brandukov at the cello. It waited until 1947 for the first edition to appear, and the trio has no designated opus number. Rachmaninoff wrote a second Elegiac piano trio in 1893 after the death of Tchaikovsky. This work is cast in only one movement, in contrast to most piano trios, which have three or four. This movement is in the classical form of a sonata, but the exposition is built on twelve episodes that are symmetrically represented in the recapitulation. The elegiac theme is presented in the first part Lento lugubre by the piano. In the following parts, the elegy is presented by the cello and violin, while the spirit is constantly evolving (più vivo – con anima – appassionato – tempo rubato – risoluto). The theme is ultimately recast as a funeral march. Despite his youth, Rachmaninoff shows in the virtuoso piano part his ability to cover a wide spectrum of sound colours. This trio has a distinctive connection to Tchaikovsky’s Trio in A minor, both in the unusual, expanded first movement, and in the funeral march as a conclusion. The suggestion often heard – that the first trio is an early elegy for Tchaikovsky – is doubtful: in 1892 the elder composer was in good health, and there was no premonition of the sudden illness that would kill him nearly two years later. Rather, the key to the connection with Tchaikovsky of this first trio is its repetitive opening theme, a four-note rising motif that dominates the 15-minute work. Played backwards it has the same rhythm opening descending motif of Tchaikovsky’s first piano concerto (written 1874-75), although now minor in the trio’s version, and the allusion would have been apparent to listeners and teachers at the university, as would the closing funeral march imitative of Tchaikovsky’s elegy to Nikolai Rubinstein. Rachmaninoff wrote this first trio while still a student and may well have intended it as homage to his elder friend and mentor. The second trio, written two years later, was the true ”elegiac” work mourning Tchaikovsky’s death.”

“It was around his thirteenth birthday that Rachmaninov was in the thick of things, composing and mingling with the great composers of Russia, notably Tchaikovsky who had a profound influence on him. Rachmaninov had already completed the transcription of Tchaikovsky’s ’Manfred Symphony’ for a piano duet (no one seems to have recorded this piece). It is said that Rachmaninov was so caught up in the fever of composing his first symphony that he wrote the first Trio élégiaque in just three days, between 18th and 21st January 1892. Within nine days of its composition he performed the trio, accompanying the violinist David Krein and cellist Anatole Brandukov at the Vosttrykov Hall. The Trio élégiaque No.1 in G minor is a short work of 15 minutes. Being a lover of piano music, I was listening for the subtleties of the piano against the backdrop of the other two instruments. However one is immediately drawn to the two stringed instruments as well. Being the noted pianist that Rachmaninov was, the piano accompaniment clearly shows the stature of the great composer and this part is never downplayed, despite the cello’s more prominent part for expression. The piece is creatively mellifluous, yet mournfully expressive. It is said that Rachmaninov never willed for the piece to be extended beyond the 1st movement. This piece is also in the mould of one of his songs ”Oh stay, my love, forsake me not” – dedicated to Anna Lodizhenskaya, a married lady of gypsy extraction whom Rachmaninov had first met the previous year. His feelings for her bordered on dangerous obsession, although the true extent of their relationship has never been established. It is also quite evident here that Rachmaninov now (aged 19) started to show his true characteristics as a mature composer. Mikhail Bukinik, a fellow conservatory student, said of Sergei in his late teens: ’And in this gathering there is Sergei Rachmaninov. Tall and gaunt, his broad shoulders give him a rectangular appearance. His long face is highly expressive, his hair is unruly, he smokes incessantly, speaks with a deep voice, and although he is our exact contemporary, seems somehow a great deal older. Everyone knows about the brilliant new pieces he composes for Professor Arensky, his profound structural instincts, extraordinary sight reading ability, perfect pitch and infectious enthusiasm for Tchaikovsky’s music.”

This piece for nine instruments presents my dubious feelings for the romantic era and expression in the history of classical music. Where as my constant notion as a contemporary composer deals with the polarisation between complexity and intuition, between techniques and emotion, between intellectuality and notion, between body and soul, between head and heart. Rachmaninov’s Trio élégiaque No. 1 in G minor stands out for me as an enormous output of romantic expression, in several senses, inspiring and less inspiring. The outbursts in the music are today most often regarded as clichés. But why should I as a composer of today, a little more than one hundred years later, suppress eventual inner wishes of this form for expressionism with its attitude and sentimentality? Not as an argument, nor as an opposition. Merely as a compliment to the intellectual, strict founded structures, and as a deep wish to fulfil and release my inner power.

It would be highly advisable for a trio of the performing ensemble to also play Rachmaninov’s Trio élégiaque No. 1 in G minor, programmed prior to my work.