The work initially seeks to illustrate the reformation as a construction site. It’s a place for restoration; for re-thinking, re-analyzing and re-shaping, and it seems to be an ongoing indefinite process. From a distance, entering the church, it looks like any ordinary recurring church maintenance, where the two-part wooden wall (H: 2,4m, W: 1,8m, D: 1,3m) seems to conceal a part of the church wall and floor, where presumably some form of restoration is in progress. On one of the gables, there’s an opening behind a curtain. The installation could hereby also give rise to ideas that it might conceal a catholic confessional. Through an activation (a one-to-one-performance) of the space, a possible connection between the installation and confession as a practice is created in the ongoing process during the exhibition. The work is an attempt to bring forth a restored version of one of the major conditions for a fortunate reformation, namely the conversation. This is explained and displayed as an eternal process; a conversation is hard to freeze into a form or a statement, it’s rather something that continues, something that happens.

Thus, our work is a reminder that the reformation should be regarded as an ongoing process and not solely something that happened in the past. The installation’s title is a translation of an old Swedish saying – mellan skål och vägg – which refers to that certain confidential conversations were held on a bench or two stools placed against a wall where you and your conversation partner sat next to each other with a drinking bowl each, enclosing yourself and thereby excluding the rest of the room. 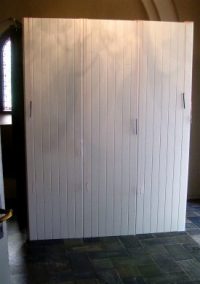 The electronic composition – as being a part of the installation – will continuously run during opening hours, via one iPod on repeat and two active speakers placed within the installation. The sounding material will consist of two juxtaposed sound files: During the time for the exhibition, we have invited the actual serving priests or imams from the local surroundings. During 60 – 90 minutes per day, (this is a estimation that has to be adjusted according to the their own schedule and what would be conceivable regarding other parameters), the varying religious representatives walks in and takes a seat. Here he or she has been requested to read and study the theses of Luther. The visitors are now able to choose whether they would like to enter the installation – the one-to-one performance – and have a conversation about the thoughts and theses of Luther.

Considering the fact that the visitors more than likely will be locals, talking to a local priest or imam, and then eventually about locally connected problems and solutions, the installation will naturally develop a clear site-specific character. The aggregated installation will hereby be both the cause to, and the result of, an activated church, considering its relationship to the heritage of Luther. 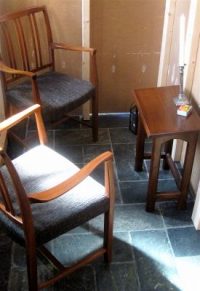