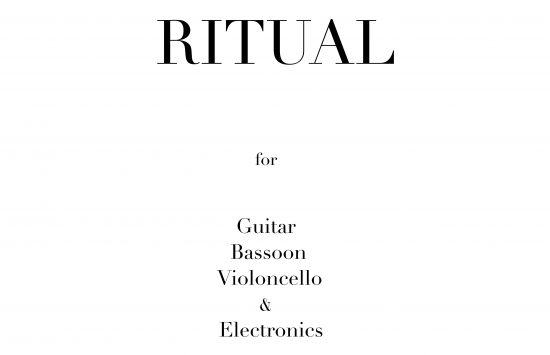 The electronic part consists of a recorded piano repeating two keys (perfect fifth) in a ritualistic manner. This solid interval is used in this work due to its strong relationship to folk music, in particular when played on “open” strings on string instruments tuned in fifths. The Piano was recorded twice – before and after being tuned. The two recordings were then juxtaposed to reach a destabilizing effect of a “stable” interval frequently used in folk music.

The acoustic instruments are then placed in this ritual – the sounding context of a stable unstable perfect fifth. (The Guitar and the Cello are asked for a scordatura that matches the pre-recorded piano). The musical material is based on Waltz after Strömberg, a Swedish folk song by August Strömberg. But it’s not until the very end of this work that it will appear in its (next to) original form. Until then, the musical material is built out of fragments that are carefully chosen, worked on, revised and then placed in a new context – a modernist refraction of the virtuoso tradition of each instrument via schoolbook examples from the instrumental research of Luciano Berio.

As a listener, you will probably recognise a familiar environment, but this sense of musical rendezvous collapses without any hope for reconciliation. The music surrounding the melodic fragments does not proceed; it does not unfold or evolve. It’s seeking a creative richness in building variations but constantly fails. But it’s hopefully through this negation the music gets its richness – both in the original and in its contemporary refocus.

All instruments should be amplified. Microfones are chosen and positioned to suit the actual venue.

The instruments’ output level are set an inch stronger when compared with the soundtrack.

The Outro – ”Waltz after Strömberg”, from rehearsal letter P – is performed without soundtrack.