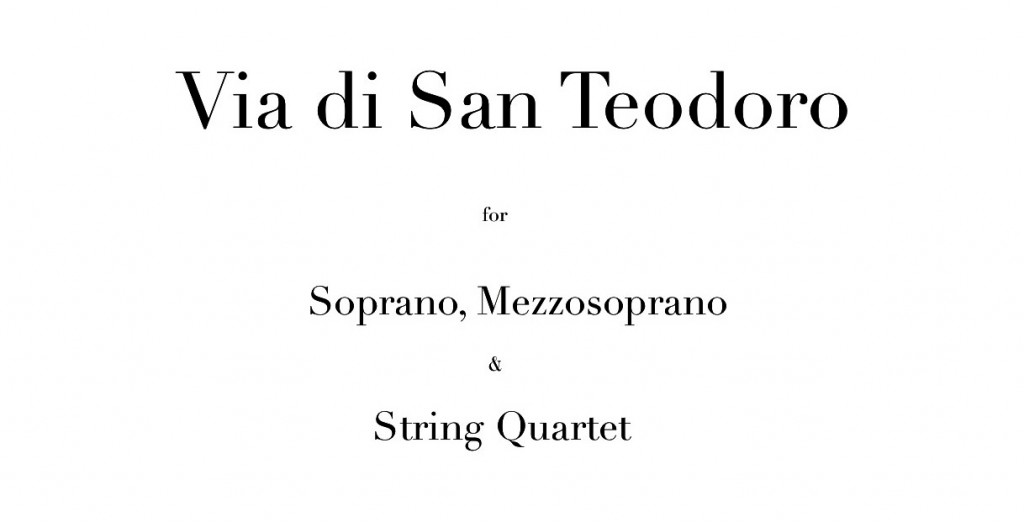 Via di San Teodoro, is a chamber work for two female voices, string quartet, video and an electronic part. It’s partly the result of four weeks residency at the Scandinavian art institution – Circolo Scandinavo – in Rome.

The work sets out from the Italian composer Giacinto Scelsi (1905-1988), whose music caused a minor revolution in the mid 80’s – partly because of its originality, partly due to the fact that he was almost completely unknown to the contemporary music scene after more than thirty year long self-chosen isolation, on Via di San Teodoro no. 8 in Rome.

The electronic part consists of field recordings on and around this address – sounds that Scelsi presumably heard – and the four short acoustic movements are based on these recordings. In between are three interludes based on recordings from The Church of St. Cecilia, containing vespers from the conventional liturgy – music he knew from childhood. The two videos are nonedited recordings displaying two sceneries from the surroundings; the river and the sparrows, constantly in motion – views he excluded but was fully aware of.

One day in the mid 40’s, Giacinto Scelsi collapsed and was taken to a psychiatric clinic in Switzerland, where he lived in exile during the Second World War. The underlying causes for the nervous breakdown were three: Mainly due to an artistic crisis based on a strong notion of doubts and dishonesty towards himself after a long period of composing serial music. In addition to this aesthetic and personal lapse, he was filled with fear for the former unseen evil in mankind after the improbable barbarism of the Second World War. But the determining factor was that his wife Dorothy at the time once again left him, and this time it was permanent, they were never to see each other again.

This became the prelude to a silence, which lasted for several years. At the clinic in Switzerland, it is told that he spent almost all of his time sitting by the piano, repeating the same note over and over again. This could obviously be seen on as a stereotype of a mentally ill composer who has reached the final state of apathy and madness, but the fact is that during these years, in this manic, repetitive state of mind, he actually found himself, his path and future. In 1952, he had recovered and moved back to Rome and into a house on Via di San Teodoro. This address was to become his last one; he stayed here until his death in 1988. And in a wider sense might be added, since he from this year on additionally chose to withdraw from the outside world.

During more than three decades he composed around one hundred works – ranging from solo instruments to large-scale orchestral pieces with choir – in his newfound idiom, with such a powerfulness and conviction who only a person with an enlightened inner room is capable to create. And this was also how he regarded himself, namely not as a composer but as a messenger – a medium between the spiritual and physical world. Unfortunately though, during the given circumstances, very few from the world opposite to Scelsi got to hear his sounding messages, since every new completed work was put on top of the rest, all accordingly to his wish to maintain his asceticism and anonymity.

It is told that he had sporadic visitors, and then mostly musicians working on technical issues in new parts. And it was finally on one of these occasions – where a cellist noticed all the scores piled up in the corner, and was “almost fainting at the mere sight”, but recovered and offered herself to list and distribute the works – when he finally was convinced to announce his music, and simultaneously himself. The cellist found a “benevolent but somewhat sceptical publisher”, and things were set in motion. His first official appearance – musically as well as personally – was at a concert in Rome in 1985. The response was overwhelming and the story about Giacinto Scelsi commenced. After more than thirty years of isolation. Three years before his death.

The Music & the Unique

What happened during those years at the clinic in Switzerland? Well, in that manic state of his, in repeating a note over a long time he created – besides from the therapeutic, rebuilding implication – a connection to his inner ear. What started as a spontaneous auditory therapy expanded to a curious listening of how a key was pressed down, how a tone oscillates and sustains. When he, after some time, realised the many different sounding characters of the same note, it led to an obsession to find out more around his “discovery”. After the recovery, he moved to Rome and started his journey there – the obsession developed into a practice, and his notion of having reached the quintessence of music could hereby be transformed from thought to paper and thereby a sounding reality.

The result – a music which dynamics and drama were based solely on a sonorous energy – created a minor revolution in the late 20th century. He was simply so ahead in his examination of the essence of timbres. Today, this approach to timbre is more or less well known, via among others the French spectral composers Tristan Murail and Gerard Grisey, who were engaged in doing analysis of tones and their spectres of overtones, but then with the assistance of computer based sonograms. The unique quality of Scelsi was that he searched and found the inherent constitution of music, ahead of the composers of that time, and in (self-chosen) isolation. This “revelation” opened up inner rooms, transformed his body into a natural sounding board, and facilitated experiences of timelessness and infinity. Which experiences we nowadays are privileged to be a part of via challenging but developing listening situations.

I simultaneously want to persist – put in relation to an average contemporary complexity – the proportionately low threshold of Scelsi’s music, mainly due to its repetitive, ritual character, which resonates in both mind and body. The patterns of repeating, microtonal variations around one single note can – at its best – contribute to powerful experiences, where you might get a small glimpse of the origin or essence of music, where melodies can lay bare and be picked out of the ongoing noise. 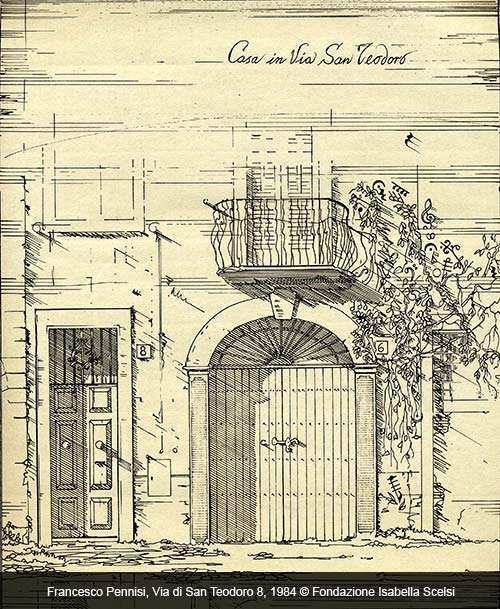 The sound from the CD should be set to a level which is average to the ensemble. The two movies – positioned as a diptych with the river to the left and the sparrows to the right and projected on two screens on the back wall – are both in silence.The attached CD with the field recordings and the DVD with the two field movies are exactly 30 minutes long. They should therefore start simultaneously.

Alex Ross: ”The rest is noise”