[Optional instruments can be excluded to suit specific ensemble formations] 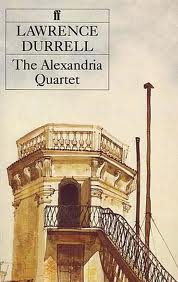 Saba Pacha is based on ”The Alexandria Quartet” (1962) by Lawrence Durrell. This novel serves as an inspiration to this piece, but not in a traditional sense where you put music to the author’s words, since I haven’t any interest in musically presenting a chronological story. Instead, one of the purposes with this work is to reveal what’s not immediately obvious in the text, i.e. the surrounding thoughts and feelings of the characters, the smells and sounds of the city. It could be a popular song from an old record player through an open window, a thin radio voice through the summer breeze, a harmonium in a street corner, songs they sing to each other in the drunken night, the silent aftermath of an intimate meeting, etc. All juxtaposed with the atmosphere of the city.

In the novel, we meet four main characters in four chapters: Justine, Balthazar, Mountolive and Clea. How their different characters and stories meet, or almost meet in short cuts and parallel stories – how they become under influence of each other within distance. It’s a novel about the life and love of some inhabitants, where the city is constantly present and plays an important role, almost a fifth character.

In the stage version, you’ll meet an actress accompanied by a somewhat floating and unstable ensemble. The musical material is very similar in rhythm, dynamics and harmonically between the instruments, which means that they would work together as a unit if a tempo and meter would be decided. But in this case it doesn’t and therefore the result will be warped, the instruments trying to be together but they ”fail”. This intention is based on one of the most important factors of the story; namely that the characters are present in each other’s lives but they actually never really meet each other.

The piece is either twenty or forty minutes long. I’ve attached a CD with the electronic parts in the two differing durations and both of them decide when the work starts and stops. The electronic part contains a surround sound, and it’s there to create an atmosphere of you being someplace, but it’s hard to specifically define a geographic place or bodily experience.

Regardless of which duration you choose, you will hear a tone, almost like a foghorn, at an approximate golden ratio. This signal is the cue to play the box marked XX, which is the only marked box. The other boxes are freely disposed ad lib in a free tempo. In XX I’m presenting material which is very similar in rhythm, dynamics and harmonically. As mentioned earlier, the structural idea derives from one of the novel’s bearing layers; namely that the characters are distantly present in each other’s lives but actually never really meet.

This will last for about a minute, then the instruments will return to their semi-closed islands, i.e. the other boxes. Semi-closed in the sense that the material are similar in all parts but differs slightly concerning order, dynamics, pitches, etc. This will give the opportunity either to interact – with other instruments as well as with the singer – or to take initiatives and bring the music in other directions.

This chamber play is based on organized improvisation. It has the variations of conflict, lust and harmony in our day-to-day confrontations as an overarching thought and subtlety as a desirable parameter. The progressive force in our lives is supported or obstructed by references in our history. This sometimes gives you the impression that, instead of going from A to B, you rise above time and slowly rotate around your own axis.

I strongly recommend the participants to read the novel. Especially the singer and particularly the chapter Justine. Rehearsals are not allowed. If you have the opportunity to consult a dramaturge or director prior to the performance, please go ahead. Good luck.

Landscape-tones
General: Steep skylines, low clouds and a pearly ground with shadows in oyster and violet.
On the lake gunmetal and lemon.
Summer: Sand lilac sky, long sequences of tempera. Light filtered through the essence of lemons. An air full of sweet smelling brick-dust and the odour of hot pavements slaked with water. Everything under a coat of gum.
Autumn: Swollen bruise greys. The dry, palpitant air, harsh with static electricity, inflaming the body through its light clothing.
Winter: Freezing white sand, clear skies, magnificent starscapes. In the great quietness of the winter evenings there is one clock: the sea.
Spring: There is no spring here – no feeling of refreshing or renewal. You are being thrown out of the winter to a summer that is too hot to breath.

The order of the songs and text fragments is not exact except for the first and the last one (I & XIII). The others are used freely, i.e. it’s possible to perform some several times and it’s not necessary to use all. There are six text fragments and seven songs. The interpretation is of course free, but the ”explanations” taken from the novel – which accompanies each text and song – ought to be taken under consideration. The singer are asked for a complementary “chord instrument” for the songs and additional favourite sounding objects for the general drama.

I. The sea is high again today

The sea is high again today,

… with a thrilling flush of wind. In the midst of winter, you can feel the inventions of spring.

Ideal voices and much beloved
those who died, of those who are
now lost for us like the very dead;
sometimes within a dream they speak
or in the ticking brain a thought revives them

The same night, on the old horn grammophone, with an emotion so deep it was almost horror,
I heard some amateur’s recording of the old poet reciting the lines…

IV. I want someone to watch my fancy

[…] and made buoyant once more by the hope, he led the way back in to the bedroom, whistling
under his breath a few staves of the famous song which he only sang aloud when he was drunk on brandy. It went something like this: […] somewhere here the melody fell down a cliff and was lost to sight, though Scobie hummed out the stave and beat time with his finger.

Old Tiresias
No-one so half so breezy as
Half so free and easy as
Old Tiresias.

Somewhere a ship’s radio was blaring out the latest jazz-hit to reach Alexandria:

It was the invitation list to the carnival ball, still echoing with the majestic poetry of the names, which had come to mean so much to me, the names of the Alexandrians. Listen…:

[…] I murmured these names as I read through the list, mentally adding the word ’murderer’ after each, simply to see whether it sounded appropriate. Only when I reached the name of Nessim did I pause and raise my eyes to the dark wall – to throw his mental image there and study it as we had studied the pictures.

The Harmonium in the corner suddenly began to pant like a fat man running for a bus; then it found its voice and gave out a slow nasal rendering of the first two phrases in tones whose harshness across the wintry hush was like the pulling out of entrails. Mountolive repressed a shudder, waiting for the instrument to subside on the dominant as it always did – as if to burst into all-too-human sobs. […] and the head of chancery sang: ………

Mountolive was annoyed. […] Why had they not, according to custom, telephoned to the villa
and called him in? […] He started the next verse plaintively:

Someone should have told me
How was I to know?
Who’s the duty cipherine?

Cowdell shook his head and frowned as he added the rider:

She is still at work-ork-ork.

[…] after dinner he was taken to the fashionable Tanzfest for the cabaret. The network of candle-lit cellars, whose walls were lined with blue damask, was filled with the glow of a hundred cigarettes, twinkling away like fireflies outside the radius of white lights where a huge hermaphrodite with the face of a narwhal conducted the measures of the ’Fox Macabre Totentanz’. Bathed in the sweat of the nigger saxophonists the refrain ran on with its hysterical coda:

From somewhere in the servants’ quarters a radio burred and scratched out the melody of an old
song which had haunted a whole Alexandrian summer: ’Jamais de la vie’. He had come to loath it now. He drove up across the crackling desert in his pennoned car, rejoicing in the sweet whistle of its cooled engine, and the wickering of the side-screens. […] Flying across the still white air with the speedometer hovering in the sixties, he hummed to himself, despite his distaste, the refrain:

X. Lord of the Shaken Tree

Lord of the shaken tree
Of Man’s extremity
Keep thou our small leaves firm
On branches free from harm
For we thy little children be!

The street outside was full of the shivering of tambourines and the voices of children, raised in a chanting sor of litany; they were going about the shops in groups, repeating the same little verse over and over again. After three repetitions he managed to disentangle the words. Of course!

XI. The Sorrow of the knowledge of parting

Now the sorrow of the knowledge of parting
Moves like wind in the rigging of the ship
Of the man’s death, figurehead of the white body,
The sails of the soul being filled
By the Ghost of the Breath, replete and eternal.

And now Nessim gave a single sweet sob out there on the balcony – the noise that bamboo stem makes when it is plucked from the stalk. And like the formal opening bars of some great symphony this small sob was echoed below in the darkness, passed from lip to lip, heart to heart. Their sobs lighted one another – as candles take a light from one another – an orchestral fulfilment of the precious theme of sorrow, and a long quivering ragged moan came up out of the empty well to climb upwards towards the darkening sky, a long hushing sigh which mingled with the hushing of the rain upon Lake Mareotis. The death of Narouz had begun to be borne. Balthazar with lowered head was quoting softly to himself in Greek the lines:

And so the saint prolonged his birthday celebrations by putting on pyjamas and indulging in a short song-cycle which included many old favourites and one curious little ditty which he sang only on birthdays. It was called ’The cruel skipper’ and had a chorus which ended:

XIII. So the city claimed me once more

So the city claimed me once more

The same city made me now somehow less poignant and less terrifying than it had been in
the past by new displacements in time.

Extract from the first performance 2006