Performers: The Composition class at the Academy of Stage and Music in Gothenburg, Sweden. 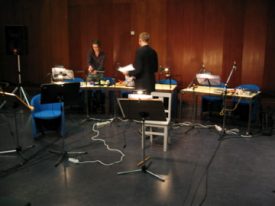 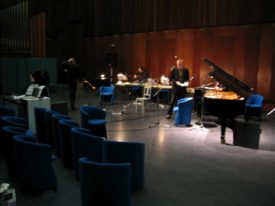 In 2006 – my third year of five at the Academy – I started to get interested in more experimental composition techniques. Instead of using my own experiences as a starting point for a new piece I looked for situations (rehearsals, instrumental or vocal meetings, etcetera) where the music could find its core through improvisation, without any regard or respect to conventional form and content. The conceptual ideas took form in the actual live jam sessions or recordings – with instruments and objects – where the sounding result contained a fresh and immediate directness. And this “aesthetics of honesty”, as we who were involved called it, was based on playfulness that simultaneously created a new type of listening, which, at that time, within the institutional framework, felt free from old overused rhetoric and prejudgement.

The strength in the resulting collective works of the group of musicians and composers at the Academy were to be found in the lack of details due to our outspoken vision of avoiding classical parameters like harmony, melody, counterpoint, ornamentation, etcetera. Instead we searched to uncover and enhance the actual reflecting space, with its smells and senses, with its varying degree of closeness or distance. Our aim was mainly to develop our individual conceptual ideas and imaginative pictures by – in a neutralising manner – transforming them into sound, repeat and rehearse, and then recapture the original idea or picture in a state of playfulness and lightness.

(The electronic part contains samples from the music of J. Cage, i.e. shorter fragments that were chosen, edited, transformed into a new context)